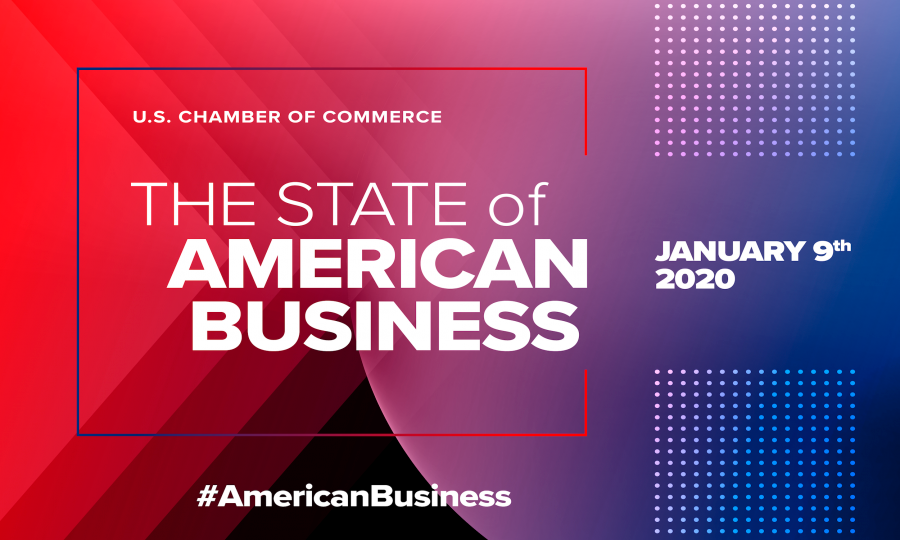 2020 State of American Business: Engage in the World

On January 9, U.S. Chamber of Commerce President and CEO Thomas J. Donohue delivered his annual “State of American Business” address where he highlighted the need for the United States to continue to engage on the world stage or risk being left behind.

Donohue stressed how the U.S. must retain its role as a champion for free trade in order to open more markets for American-made goods and services and create more business to grow. He also pointed out the need to tear down barriers to trade and limit the use of tariffs.

“Engaging with the world is our best strategy for strong national security and lasting prosperity,” said Donohue. “Embracing free trade doesn’t mean ignoring unfair practices aimed at us. It means leading the way in setting the rules and enforcing them, based on the simple propositions that more trade is better than less trade, more customers are better than fewer customers, and expanding markets globally will benefit everyone,” he continued.

The pursue of trade agreements
He lauded House passage of the U.S.-Mexico-Canada Agreement and raised the need to pursue similar high-standard trade agreements with the UK and EU, Japan, Brazil, and emerging markets in Africa as well as the importance of U.S. engagement in the booming Asia-Pacific.

Donohue also stressed how American businesses and consumer bear the cost of tariffs. To illustrate his point, Donohue mentioned Maryland-based small business owner Seth Weiner, whose company has had to adapt operations to withstand the impact of tariffs.

“Trade tensions with China have forced businesses like Seth’s to adapt their business strategies and modify supply chains,” said Donohue. “They must be quick, nimble, and creative to keep costs down, products flowing, and people employed.”

Ahead of next week’s signing of a Phase I trade deal with China that would begin to reduce tariffs, Donohue acknowledged that both countries deserve credit for reaching an agreement while noting that substantial work remains.

“There’s still a long way to go. Phase II must address Chinese trade and industrial policies that put American businesses at a competitive disadvantage. It is in both nations’ interests to resolve those issues and restore our commercial relationship,” said Donohue.

“If the World Trade Organization didn’t exist, we’d have to create it. Its rules protect American business from unfair treatment and protectionism,” remarked Donohue. “Safeguarding this institution and its dispute settlement system should be an urgent international priority. Let’s not shutter the WTO Appellate Body. Such drastic action doesn’t serve America’s interests.”

Concluding his remarks about America’s leadership in the world, Donohue said, “America must be involved, not isolated. We must set the pace, in an open and collaborative manner, for global engagement not just in trade, but also finance, technology, intellectual property, investment, environment, and the rule of law.”

Source: Donohue: ‘Engaging with the world is our best strategy for strong national security and lasting prosperity’, U.S. Chamber of Commerce