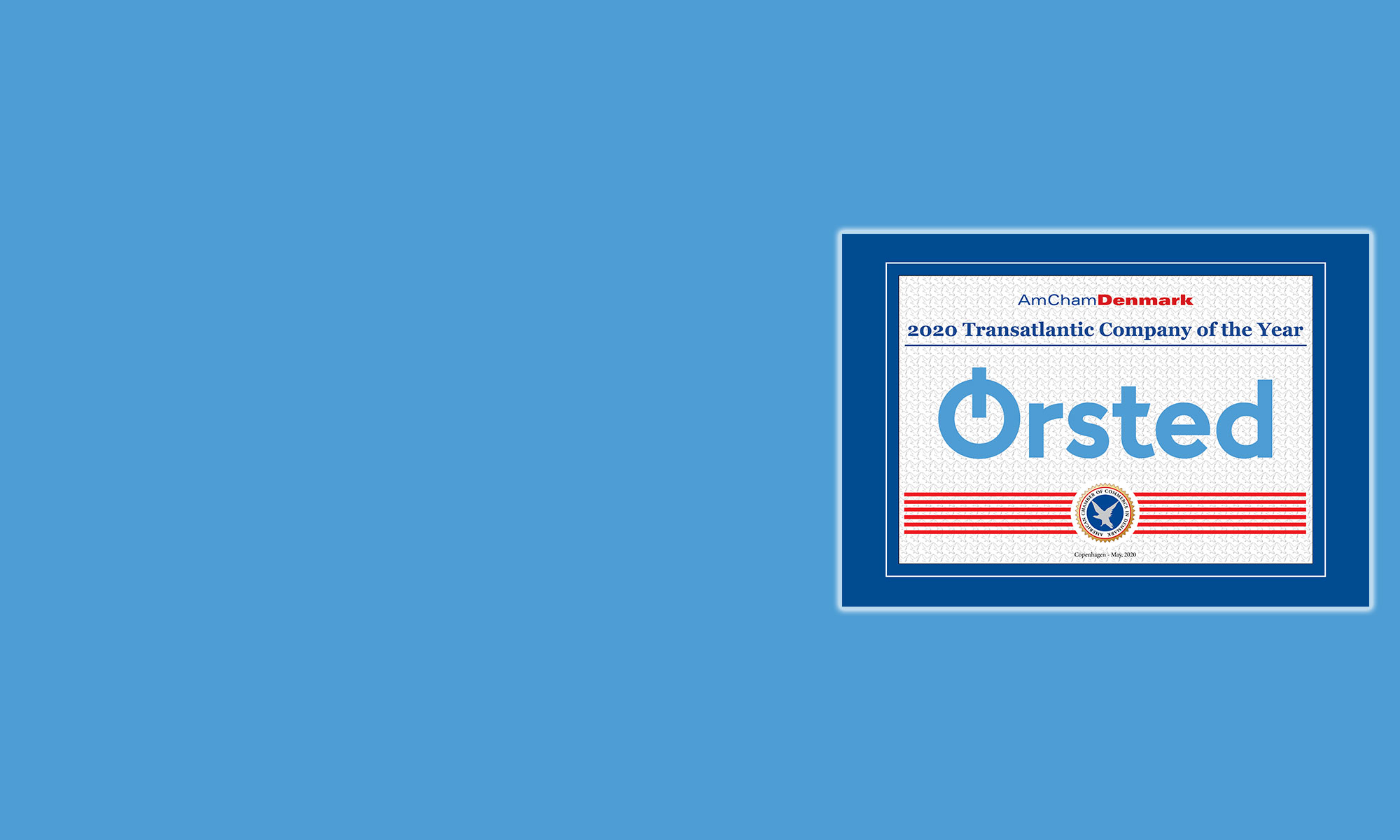 Ørsted has been recognized for their strong expertise and innovation in offshore wind development in the U.S. as well as their ability to form successful partnerships in research & innovation.

AmCham Denmark recognized Ørsted as the winner of the Transatlantic Company of the Year at AmCham’s virtual 2020 Transatlantic Summit, together with Danish Ambassador to the U.S. Lone Dencker Wisborg and the U.S. Ambassador to Denmark Carla Sands, both of whom participated in the event.

The annual award highlights the important contributions of Danish companies investing in the U.S. and is promoted in partnership with the American-Danish Business Council in Washington DC.

Ørsted’s Way to Success in the U.S.
Spokesperson and Chairman of the jury, Jørgen Bardenfleth, noted that the jury was especially impressed by Ørsted’s fast growing success in the U.S., and the company’s ability to create successful partnerships in the communities where they operate.

When accepting the award, Thomas Brostrøm, CEO of Ørsted North America (Offshore) said, “Ørsted has taken its Danish roots and world-class expertise in offshore wind development to an emerging U.S. market. We have been awarded six offshore wind projects and once they are built, we can deliver clean electricity to 2 million households on the Eastern seaboard, putting us up front as leaders in the development of this fast-growing industry.”

In addition to offshore wind activities, Ørsted has also expanded into onshore wind, solar and battery storage facilities in the U.S.

According to jury spokesperson Jørgen Bardenfleth, Ørsted’s aptitude in bringing job creation and training, economic development, and important investments to local communities on the East Coast was an important point for the jury’s decision.

During the past decade, Ørsted has transformed its company from being one of the highest fossil fuel users in Europe to being recognized as the world’s most sustainable company by Corporate Knights 2020 Global 100 Index. Ørsted plans to invest DKK 200bn (USD 30.2bn) in green energy from 2019-2025 globally, and more than USD 10 bn is planned for green energy projects in the U.S..

“We believe the growth of renewable energy in the United States can spur social development and make the planet cleaner. From Denmark to America, Ørsted is living up to its promise to create a more sustainable future,” Thomas Brostrøm states.

According to AmCham’s Executive Director, Stephen Brugger, the purpose of the award is to highlight the importance of transatlantic trade and investment, and to showcase examples for others to follow.

“The sustainability sector can be volatile, and despite challenges in the current U.S. market, Ørsted has remained committed to the U.S. – investing massively and positioning a Danish company of the future, which we hope will serve as an inspiration to others,” he says.

AmCham congratulates Ørsted and recognizes all the finalists for their outstanding achievement.

See all the finalists for the 2020 Transatlantic Company of the Year here.