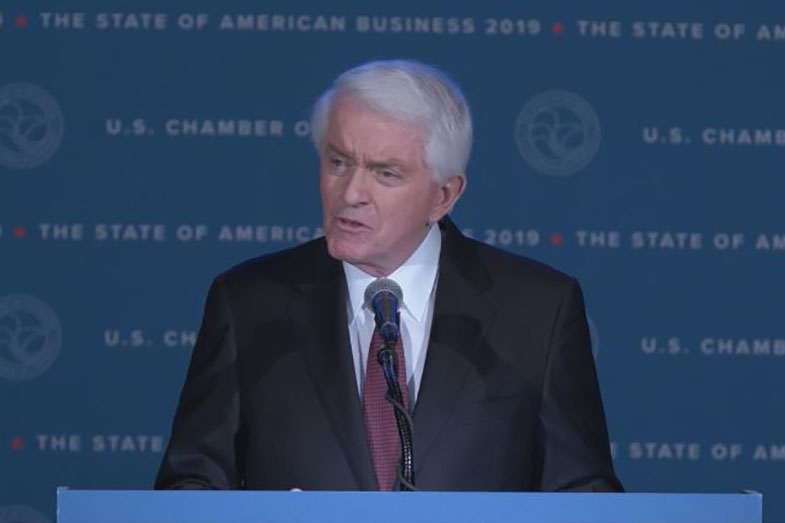 In response to President Trump’s immigration proclamation (June 22), the U.S. Chamber of Commerce’s President Tom Donohue states that that it does not serve the interests of the United States or the nation’s economy.

On June 22, President Trump signed a Presidential Proclamation that extends the entry suspension of applicants for an immigrant visa (also known as a “green card”), which was originally issued on April 22. Further, the Proclamation suspends visa issuance and entry of certain H-1B, H-2B, L-1, and J-1 visa holders. The Proclamation does not apply to anyone who is already in the United States or who is outside the United States but has a valid visa. Despite these limitations in scope, the measure represents yet another step by the administration in its ongoing efforts to limit legal immigration.

“Today’s proclamation is a severe and sweeping attempt to restrict legal immigration. Putting up a ‘not welcome’ sign for engineers, executives, IT experts, doctors, nurses and other workers won’t help our country, it will hold us back. Restrictive changes to our nation’s immigration system will push investment and economic activity abroad, slow growth, and reduce job creation.

“We are fighting for more investment and more growth in America because that means more jobs, and today that fight takes on a new level of urgency. We have long advocated for a rational immigration system that meets the needs of our economy and reflects the values of our country. Today’s proclamation serves neither of those interests. The U.S. Chamber will continue to strongly advocate for an immigration system that serves the interests of all Americans.”