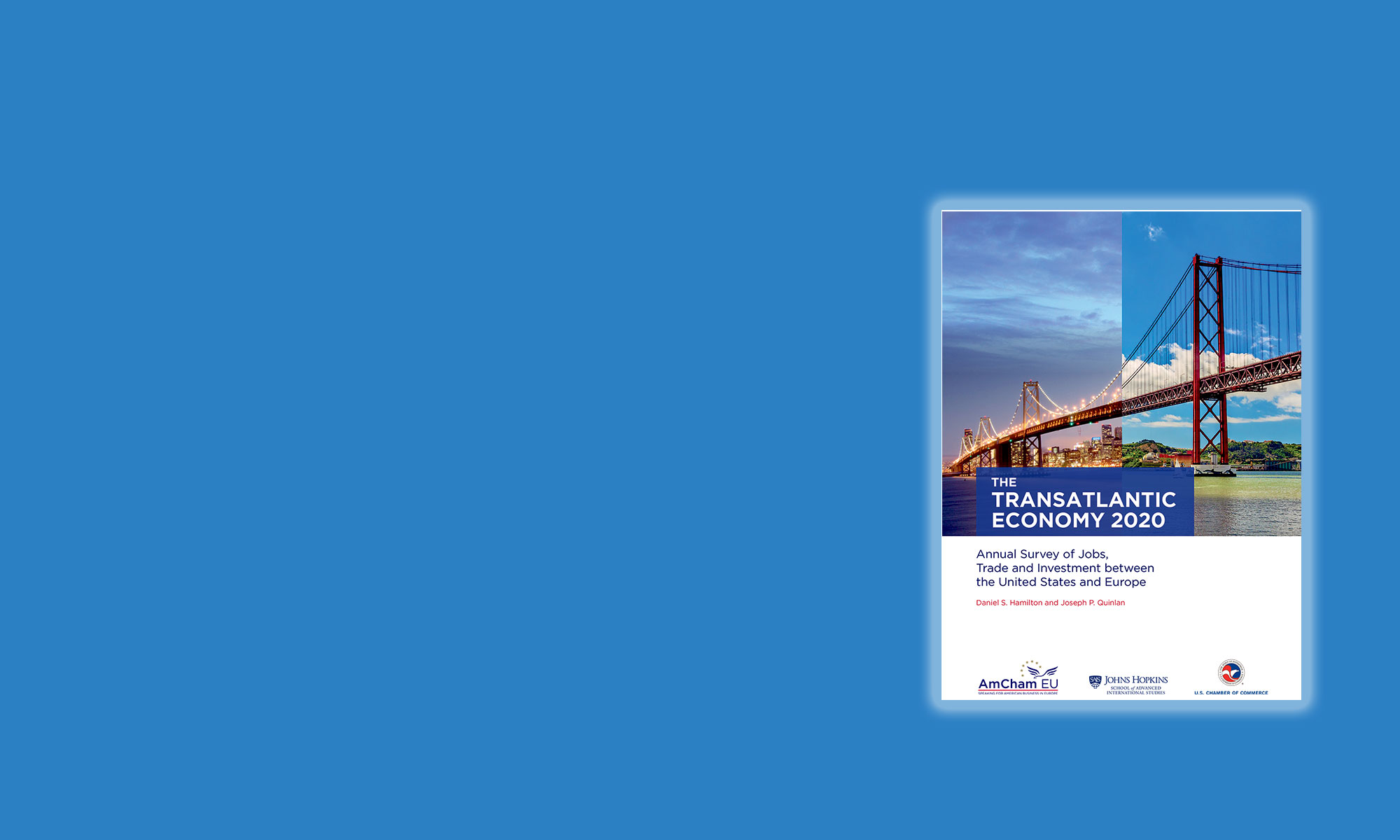 The United States and Europe share the most integrated and economic partnership globally. Today, the relationship is being tested by the recent impact of the Corona virus on supply chains and demand, persistent trade disputes, and uncertainty about the contours of the UK’s future economic relationship with the EU.

However, despite transatlantic political turbulence, the U.S. and Europe remain each other’s most important markets. No two other regions in the world are as deeply integrated as the U.S. and Europe. The transatlantic economy generates $5.6 trillion in total commercial sales a year and employs up to 16 million workers on both sides of the Atlantic. It is the largest and wealthiest market in the world, accounting for one-third of world GDP in terms of purchasing power and half of total global personal consumption.

In addition, more than $3.8 billion in goods and services is traded across the Atlantic every single day. No place in the world has attracted more U.S. foreign direct investment than Europe, and Europe remains by far the largest source of foreign investment into the U.S. Moreover, the digital revolution is dramatically reshaping what can be traded and delivered electronically, leading to record levels of services exports in both directions and will likely be a key driver for the transatlantic relationship onwards.

This concludes a newly published report ‘The Transatlantic Economy 2020’ by Dan Hamilton and Joe Quinlan (Johns Hopkins University). The report is commissioned by AmCham EU and the U.S. Chamber of Commerce in Washington DC.

The U.S.-Danish Economic Partnership Stronger Than Ever
In a Danish perspective, the economic partnership with the U.S. is stronger than ever; Denmark plays a huge role in the U.S. considering its relative size; that U.S. jobs supported by Danish companies are around 40,000 and U.S. companies generate more than 41,000 jobs in Denmark, creating an increasingly equal, vital relationship. Danish exports of goods now at 8,9 billion USD (up by 1,2 billion).

AmCham Denmark’s Executive Director Stephen Brugger says, “In the midst of a global pandemic and a looming recession, it is indeed a positive story that Danish companies continue to thrive in the U.S. market, which has recently surpassed Germany as Denmark’s largest export market. In fact, Danish companies have added more than 1,500 jobs in the U.S. in a year.”

He continues, “the current covid-19 crisis will inevitably add to existing economic and political instability across the Atlantic, which will challenge this important trade relationship. However, despite mounting uncertainty, the report emphasizes that the fundamentals of the transatlantic relationship remain strong and will certainly play a key role in the economic recovery to come for both the Danish and the global economy in general. This demonstrates that the transatlantic cooperation is needed more than ever before.”

To view a factsheet of the DK-U.S. relationship, click here.

About the Report
The ‘Transatlantic Economy’ stydy is conducted independently on an annual basis by Daniel Hamilton and Joseph Quinlan (John Hopkins University, Foreign Policy Institute). The report is commissioned by the American Chamber of Commerce to the EU (AmCham EU) and the U.S. Chamber of Commerce – as well as co-sponsored by five European AmChams: AmCham Denmark, AmCham Finland, AmCham Ireland, AmCham Italy and AmCham Sweden. This year’s edition features new inserts on topics such as Brexit and the EU-U.S. auto trade and investment landscape, as well as individual profiles for 30 European countries and all U.S. states.