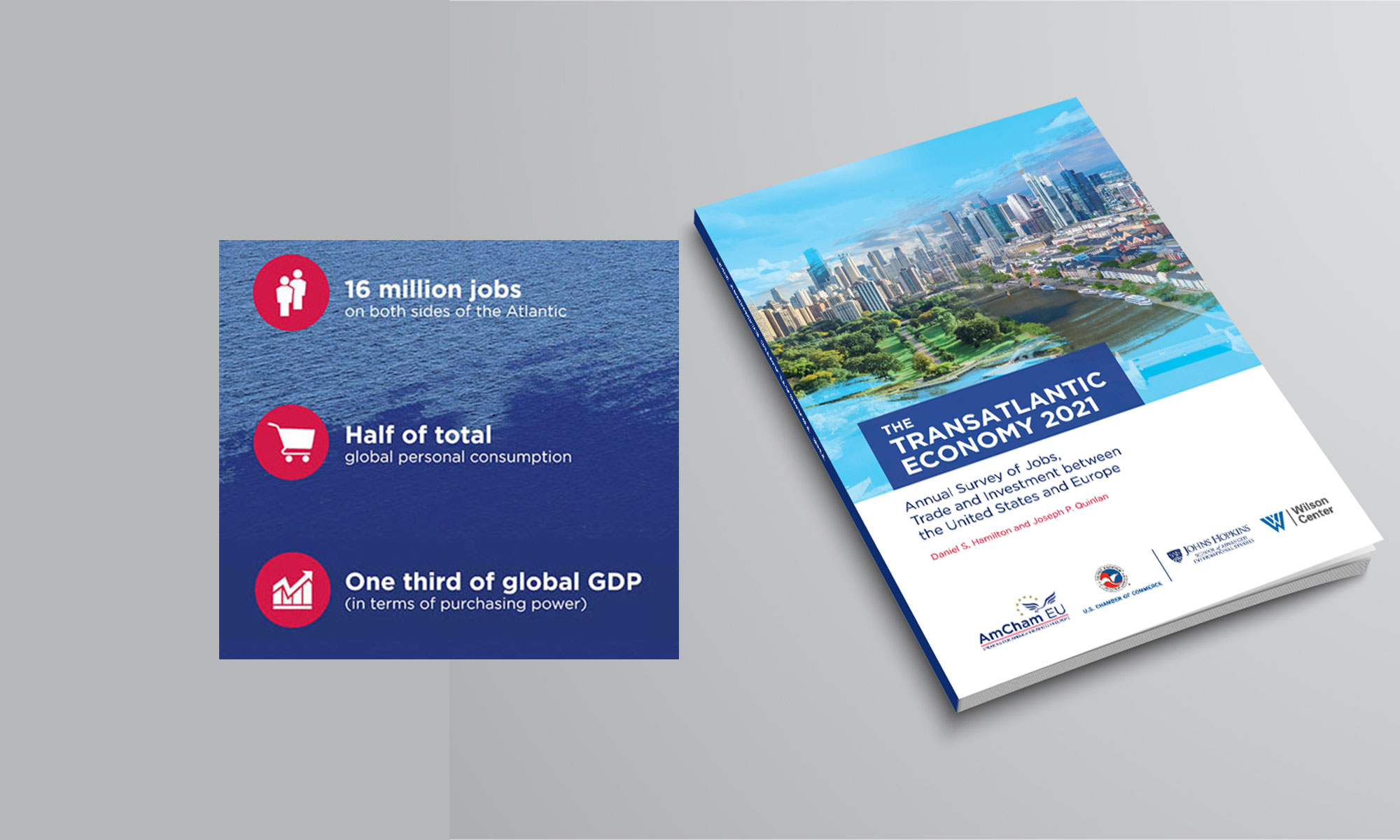 Despite transatlantic political turbulence and the COVID-19-induced recession, the U.S. and Europe remain each other’s most important markets. The transatlantic economy generates $6.2 trillion in total commercial sales a year and employs up to 16 million workers in mutually “onshored” jobs on both sides of the Atlantic. It is the largest and wealthiest market in the world, accounting for half of total global personal consumption and close to one-third of world GDP.

This is the conclusion of a newly published report ‘The Transatlantic Economy 2021’ by Dan Hamilton and Joe Quinlan. The report is commissioned by AmCham EU and the U.S. Chamber of Commerce with support from AmCham Denmark. The report was launched on March 24 at AmCham EU’s annual Transatlantic Conference featuring European Commission President Ursula von der Leyen. Read President von der Leyen’s keynote speech here

Bent, But Not Broken
The last four years subjected the transatlantic partnership to the ultimate stress test: escalating trade tensions and tariffs; differing objectives on climate change; conflicting views over China, Russia and Iran; quarrelling over defense spending and the viability of NATO; deviating approaches to the WTO; disputes over privacy regulations and digital taxes; and divergent positions on Brexit. The icing on the proverbial cake: a once-in-a-century global health crisis that brought the global economy to its knees.

Time to Heal: The Transatlantic Partnership in 2021
At its best, 2021 will be a time to heal. A time to move our societies and our economies from sickness to health. A time to repair and recast the transatlantic partnership. COVID-19 is an extraordinary test of transatlantic and global cooperation. It is also a transformative opportunity for the U.S. and Europe to build international coalitions to end the pandemic and create new economic pathways out of the recession.

Emerging areas for EU-US cooperation
Transatlantic leadership is critical to finding common solutions to global challenges. The EU and the U.S. should seize the renewed optimism and positive momentum to advance and deepen the world’s largest trade and investment relationship. While they can build on decades of efforts to enhance regulatory cooperation and remove barriers to trade and investment, they should also address new and emerging issues that arise from the transformation of our economies.

About the Report
The ‘Transatlantic Economy’ stydy is conducted independently on an annual basis by Daniel Hamilton and Joseph Quinlan (John Hopkins University, Foreign Policy Institute). The report is commissioned by the American Chamber of Commerce to the EU (AmCham EU) and the U.S. Chamber of Commerce – as well as co-sponsored by five European AmChams: AmCham Denmark, AmCham Finland, AmCham Ireland, AmCham Italy and AmCham Sweden. This year’s edition features new inserts on topics such as Brexit and the EU-U.S. auto trade and investment landscape, as well as individual profiles for 30 European countries and all U.S. states.