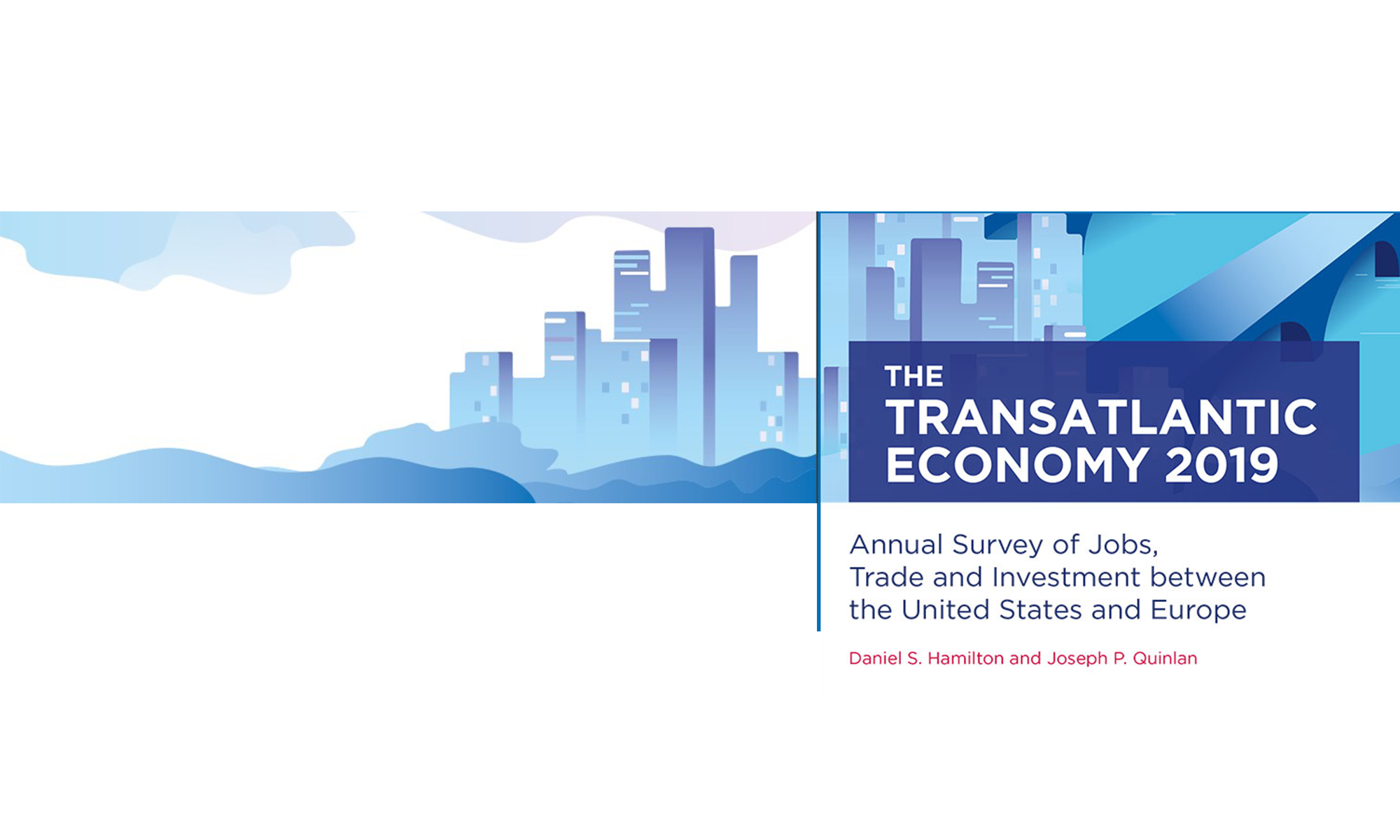 The transatlantic economy enters 2019 on unsettled ground, beset by political volatility and economic uncertainty. Transatlantic economic growth is set to slow and the United States is expected to outperform relative to the European Union and most countries in Europe.

The transatlantic economy enters 2019 on unsettled ground, beset by political volatility and economic uncertainty. Transatlantic economic growth is set to slow and the United States is expected to outperform relative to the European Union and most countries in Europe.

This concludes a newly published report ‘The Transatlantic Economy 2019’ by Dan Hamilton and Joe Quinlan (Johns Hopkins University). The report is commissioned by AmCham EU and the U.S. Chamber in Washington DC.

However, despite transatlantic political turbulence, the U.S. and Europe remain each other’s most important markets. No two other regions in the world are as deeply integrated as the U.S. and Europe. The transatlantic economy generates $5.5 trillion in total commercial sales a year and employs up to 16 million workers on both sides of the Atlantic. It is the largest and wealthiest market in the world, accounting for one-third of world GDP in terms of purchasing power and half of total global personal consumption.

Susan Danger, CEO, AmCham EU, says: “Year after year, the numbers continue to tell a powerful story. The strength and importance of the transatlantic economy is unparalleled in the world. At a time of uncertainty and change, Europe and the United States simply thrive together.”

The U.S.-Danish Economic Partnership Remains Strong
In a Danish perspective, the economic partnership remains strong with the U.S. According to Susan Danger, Denmark plays a huge role in the U.S. considering its relative size. She specifically highlights that U.S. jobs supported by Danish companies are around 39,000 and U.S. companies generate more than 41,000 jobs in Denmark, creating an equal, vital relationship.

“Overall the transatlantic relationship is very strong but we must continue to work together to overcome whatever political disputes that may arise. In this, cooperation is absolutely key. I can only encourage the business community to go out and tell the positive narratives of maintaining these strong economic ties,”, says Susan Danger in a video interview with AmCham Denmark (watch video to the right).

To view a factsheet of the DK-U.S. relationship, click here.

About the Report
The ‘Transatlantic Economy’ stydy is conducted independently on an annual basis by Daniel Hamilton and Joseph Quinlan (John Hopkins University, Foreign Policy Institute). The report is commissioned by the American Chamber of Commerce to the EU (AmCham EU) and the U.S. Chamber of Commerce – as well as co-sponsored by five European AmChams: AmCham Denmark, AmCham Finland, AmCham Ireland, AmCham Slovenia and AmCham Sweden.  This year’s edition features new inserts on topics such as Brexit and the EU-U.S. auto trade and investment landscape, as well as individual profiles for 30 European countries and all U.S. states.